Empowerment, where to begin 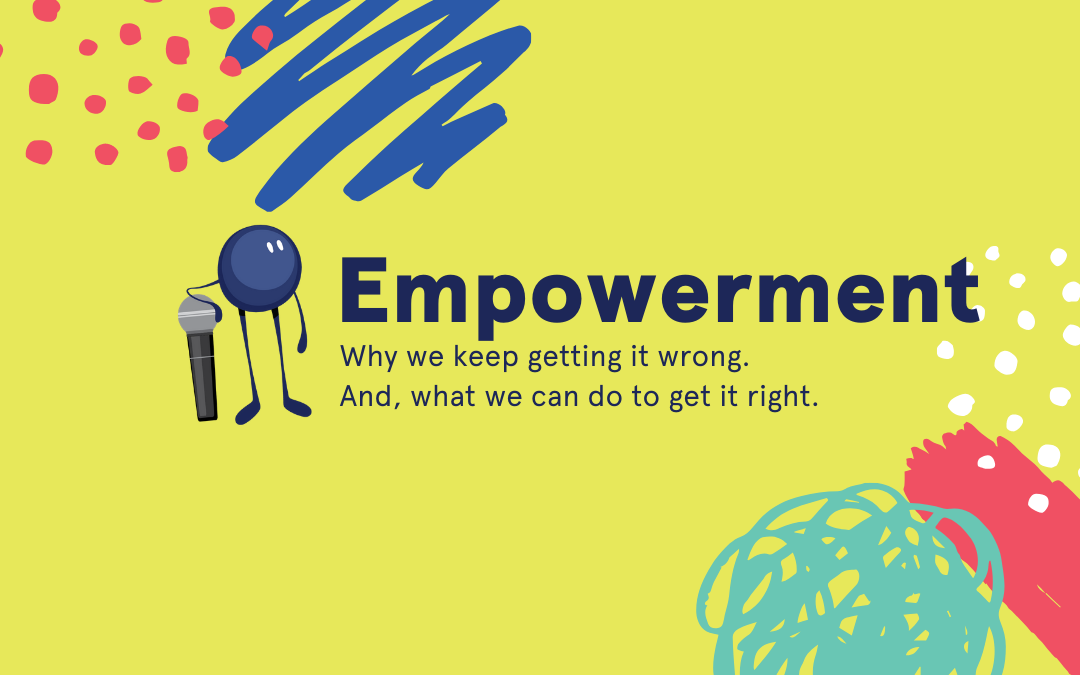 When it comes to leadership, I believe that it’s all about people standing for something and having the courage to follow through. If asked, that’s the answer that I give when people ask me to define what leadership is.

That something can be a belief, a goal, a standard of work, a promise to do something, a cause. Do you get my drift?

Whatever you’re standing for, it’s the act of commitment and action that makes for leadership. Thinking it isn’t enough, you have to make something happen for leadership to be experienced.

If I’ve had any ambition in my career it’s to democratise leadership. To make it less about something that leaders and managers do and everything about the personal power that every individual can exercise given the right conditions.

Which brings me to one of my pet hates, the whole, let’s empower our people peeve. Even hearing the word puts my hackles up.

As a leadership developer, I hear people talk about empowerment all the time. This is a typical seesaw of empowerment comes up in conversation.

Seeing empowerment in action is a glorious thing. And when it does, few people are talking about “being empowered”.

Instead, they talk about how much they enjoy their job, what they’ve achieved and some a story that tells me about how something went really well, how proud they are of their team and talk about their colleagues in a collegial way.

Empowering people is lauded as one of the most important leadership skills. After all, empowered employees make for a more engaged and productive workforce. The flip side of empowerment is responsibility and accountability.

In my opinion, empowerment has become one of those weasel words in the lexicon of management and leadership. It’s a linguistic sticking plaster for the impasse between a manager and their team. Trying to empower people is plain wrong, and here’s why.

The team leader wants their team to step up their performance and do their best work, to take more initiative and accountability for their results. By happy coincidence, the team wants the same. The manager works with the team to set their own goals and make their own decisions about how they’re going to do the work and then leaves them to their self-reliant ways to do a great job.

But not much changes. Initially, individual or team feel excited at the outset and does a great job making plans. But quickly people struggle to make progress, to organise, to live up to the self-defined standards. The team manager gets frustrated with the lack of progress. They watch a little closer, noticing that people aren’t taking up the new mode of “being empowered”. It isn’t long before watching becomes supervising before the manager intervenes and takes control again.

So what goes wrong?

In these situations, people think that there has been a transfer of power but what actually opens up is a leadership gap. Teams that are used to leaving the leading to the leader overlook that empowerment means self-motivation, self-reliance and self-coaching. All that’s down to the individual human.

Being fully empowered means taking up the leadership slack. For many people, it’s an inconvenient truth. They can’t be empowered, they can only empower themselves.

So, like the proverbial chicken and egg, which comes first leadership or empowerment?

When we put so much emphasis on people in leadership positions empowering their teams, we overlook activating the leadership necessary for full responsibility, resourcefulness and accountability to happen.

It’s implicit that with empowerment there’s a necessity to lead yourself. But in my experience, people think empowerment means gaining power from someone else, in other words, it means choice. The choice to do things their way. To choose whether to do at all. A sense of freedom and power to focus on your own terms.

The most empowered people aren’t worrying about whether they have the power because they work in an environment where they have all they need to lead themselves well. They take their leadership responsibility seriously and use it contribute to the best of their ability.

They don’t waste time wondering their purpose, their values, the rules of engagement because that’s all pre-determined with a clear agenda. Their work is to follow that lead.

Great leadership has a tendency to generate more leadership.

So, if you’re looking for a simple recipe empower your team, just stop. You’ll never be truly successful. Instead, focus on these four conditions that enable leadership to happen:

When you share the leadership load with people, it’s natural for them to empower themselves. Go try changing the conversation and create the right conditions for everyone to lead for themselves, and see how enabling, not empowering, is the way to go.